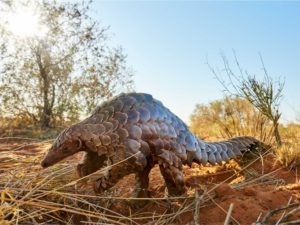 A little over five years ago, Dr Wendy Panaino, a researcher at Tswalu Kalahari Reserve, followed her passion and began the journey to investigate the potential impacts of climate change on the pangolins of Tswalu. Parts of Africa are predicted to get hotter and drier with climate change, yet little is known about how mammals might cope with these changes.

The already hot and dry Kalahari region of South Africa is an ideal environment to study the impacts of increasing heat and aridity on mammals because it provides an analogue for the conditions likely to become prevalent elsewhere across Africa.

A research team at the University of the Witwatersrand had previously learned that ant- and termite-eating aardvarks in the Kalahari do not cope well with reductions in their primary food resource, harvester termites, following drought conditions. 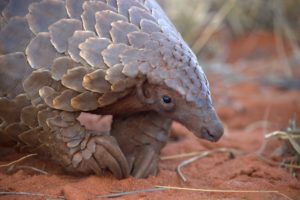 Dr Panaino and her team from the same university wanted to know how other ant- and termite-eating mammals, such as pangolins, might cope with similar changes in their environment.

Pangolins are elusive and predominantly nocturnal mammals, and they occur at low population densities, making them difficult to study in the wild. Facilitated by the Tswalu Foundation, and by attaching tracking transmitters to individual pangolins at Tswalu, Dr Panaino and her team could track and monitor the lives of these secretive animals for two consecutive years. The use of camera traps placed outside pangolin burrows meant that the team could gain a good understanding of the times that pangolins commenced and ceased activity.

Spending countless hours following pangolins, mostly at night, Dr Panaino was able to record interesting details about the pangolin diet, which also included collecting their scats. The team also implanted pangolins with miniature body temperature data loggers, which allowed them to record the long-term body temperature patterns of pangolins. Body temperature records are useful because they allow researchers to assess the welfare of animals, which ultimately means that they can understand how animals cope with changes in their environment. 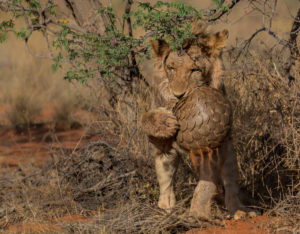 Dr Panaino’s research revealed that pangolins specialized on only three prey items, but shifted their diet slightly in response to food scarcity in winter (which was also reflected in their low body temperatures during this time), particularly following a summer that received low rainfall. Pangolins also were more diurnal than previously believed, particularly during winter. Unfortunately, the behavioural and dietary shift did not prevent a reduction in energy intake during that time.

Whether the behavioural and dietary flexibility exhibited by the pangolins in Dr Panaino’s study will protect pangolins against increasing temperatures and aridity, in conjunction with continuing reductions in insect population associated with climate change, remains to be determined. What Dr Panaino learned at Tswalu goes beyond just the Kalahari and can be applied to pangolins (and other ecologically similar species) elsewhere across Africa.

Dr Panaino believes that, while studying individual species in an ecosystem is an important way to contribute some pieces of the puzzle, an integrated, ecosystem approach provides more information about how whole ecosystems might respond to changing environments. Dr Panaino continues to be involved with pangolin research, working as a project manager under the Tswalu Foundation’s Kalahari Endangered Ecosystem Project (KEEP), an umbrella program that aims to understand the responses of the Kalahari ecosystem and its main constituents to climate change.