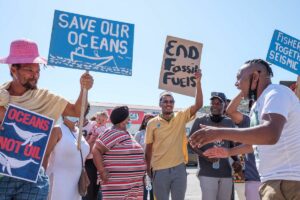 With legal action in progress against the National Energy Regulator of South Africa (Nersa), Karpowerships SA and the Minister of Mineral Resources and Energy, The Green Connection says it is happy that no Power Purchase Agreements (PPAs) with the companies were signed, today.

The Green Connection’s Strategic Lead Liziwe McDaid says, “As the climate crisis intensifies, South Africa needs to make a transition to sustainable energy sources that do not emit greenhouse gases. While it is positive step to see the Minister sign the PPAs for more renewables, we need much more. The Integrated Resource Plan (IRP) still maintains a ceiling/limit on the amount of renewable energy that can be added to the grid. We need a revision of the IRP. With our climate goals in mind, Karpowerships do not make the grade. South Africa cannot afford to be locked into fossil fuels for another twenty-odd years.”

In April, The Green Connection launched an application, asking the Gauteng High Court in Pretoria to review and set aside Nersa’s decision to grant the three electricity generation licenses to Karpowerships in Saldanha Bay, Coega and Richards Bay. The eco-justice organisation asserts that the process is noticeably flawed, since Nersa had granted the licenses even though the powerships had no environmental authorisations from the Department of Forestry, Fisheries, and the Environment (DFFE), which are a requirement.

McDaid says, “From our perspective, Nersa is not an environmental institution, but it has environmental obligations. We must ask, therefore, why the Regulator granted an electricity generation licence to Karpower when the government arm that does have environmental responsibilities had refused them? Why did Nersa not wait until the DFFE had ruled on the Karpower appeal?”

Since filing the court application, in April 2022, Nersa and the Karpowership SA companies have given notice that it will oppose the application. Eskom, on the other hand, has indicated that it will abide by the court’s decision. And to date, The Green Connection has received no communications from the Minister of Mineral Resources and Energy (also a respondent in the application), regarding his intentions in the matter.

The Green Connection’s Community Outreach Coordinator Neville van Rooy says, “During the Environmental Impact Assessment (EIA) stage, there was a massive public outcry, particularly from the small-scale fisher communities around the ports where these floating kettles will be moored. These self-employed small-scale fishers are particularly concerned about the irreparable harm that Karpowerships and other oil and gas projects could cause to marine life and ecosystems, which will more than likely affect their livelihoods. Under these circumstances, how could Nersa issue electricity generation licenses, potentially risking the livelihoods of those along the coast?”

The Green Connection is of the view that by granting these generation licenses, Nersa – as the custodian and enforcer of the electricity regulatory framework – is not safeguarding the needs and interests of present and future electricity users, as provided for in Electricity Regulation Act (ERA). The eco-justice organisation adds that it does not believe that Nersa is facilitating “a fair balance between the interests of customers and end users, licensees, investors in the electricity supply industry and the public.”

Since March 2021, The Green Connection has been questioning governments’ reasoning to include the three (3) Karpowerships companies as its preferred bidders for the Risk Mitigation Independent Power Producer Procurement Programme (RMIPPPP), calling it “wholly unsuitable” to address the country’s energy emergency. The expert affidavit, supporting the court case, points out that by locking the country into 20-year Karpower PPAs, the electricity price will likely increase because Karpowerships only make any economic sense when strictly used as a short-term, emergency solution.

The Green Connection’s expert, Hilton Trollip, found that using Karpowerships in long-term contracts could add an additional R2-billion a year to electricity costs, which would then be passed on to consumers via Eskom tariffs.