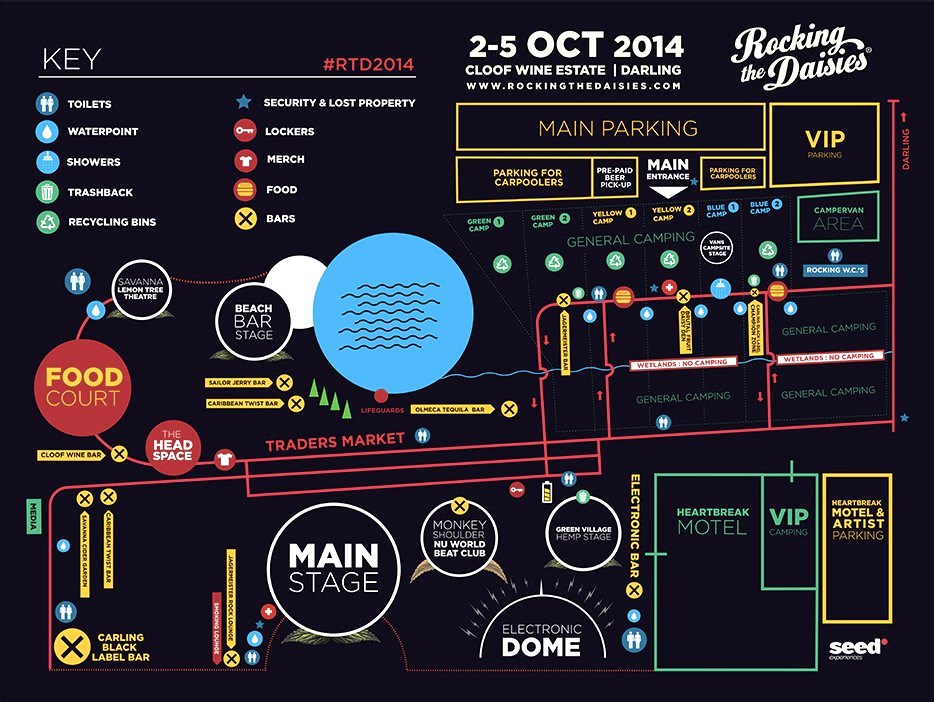 Rocking green is the intention once again at the Daisies held this year in October, where the motto is  ‘play hard, tread lightly.’

How do they do it?

A full, comprehensive eco audit is performed each year and is undertaken by an independent organisation. This audit covers from procurement to direct production of the festival itself and the transport to and from. Water, waste, carbon, energy are all areas that are monitored.

Here are some excerpts from Rocking The Daisies 2014’s sustainability report:

The Seed team had developed a culture of sustainable event management through their continued commitment and staff education. All staff members were expected to implement sustainability principles and practices through the year as part of the standard operating procedure. At the office they procured FSC paper for their printers, used energy saving lights and equipment and separated their waste at source.

Preference was given to local goods and services, firstly from within the Western Cape and then South Africa. Natural light and ventilation was used in their office most of the time. Staff members weree encouraged to lift share for meetings and site visits.

The vendors (food), food trailers and traders (other products) had to comply with the requirements set out by the organisers, which included a refundable green deposit. A variety of food options were provided by a range of different food vendors, both in the campsite and in the main festival areas. This included vegetarian options from Portobello, Oh so Peachy and Fry’s.

The traders were selected based on their product selection to provide a variety of products that were mostly locally manufactured. A questionnaire is sent out to all traders and vendors, which shows their level of understanding and commitment.

The venue was the Cloof Wine Estate, which endeavours to protect rare and endangered vegetation and plant species, such as Renosterveld, a highly threatened vegetation type. The estate participates in the Biodiversity and Wine Initiative, which encourages the regrowth of indigenous fauna and flora unique to that area. This is an important contribution to local and global biodiversity. 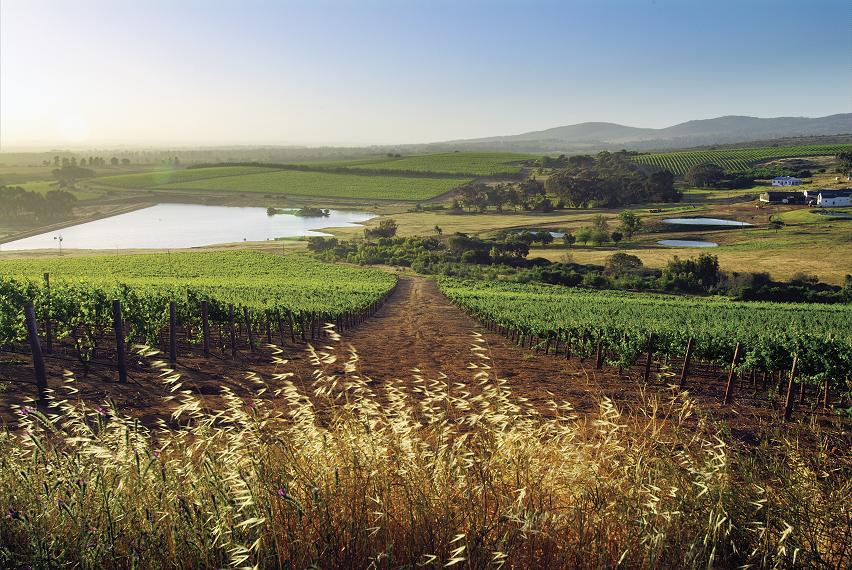 The Environmental Conservation Manager for the Cloof Wine Estate provided guidance to the Seed team on which areas had to be demarcated and protected. He was on-site over the weekend to check on the potential impact. Fencing was provided around potentially sensitive areas such as the vineyards and water causeway, and three separate bridges were built to reduce the impact of foot traffic over the water causeway area.

In the past a potential concern was raised by the Environmental Conservation Manager around the re-allocation of sand from another area of the farm to the Beach Bar at the dam. It was mentioned that this might become a problem in the future and that alternative options may need to be explored.

There was a strong focus on electronic communication (website, facebook, twitter, radio) and electronic ticket sales (nuticket). Electronic signage on stage was used to announce performers and provide environmental messages through LED technology. 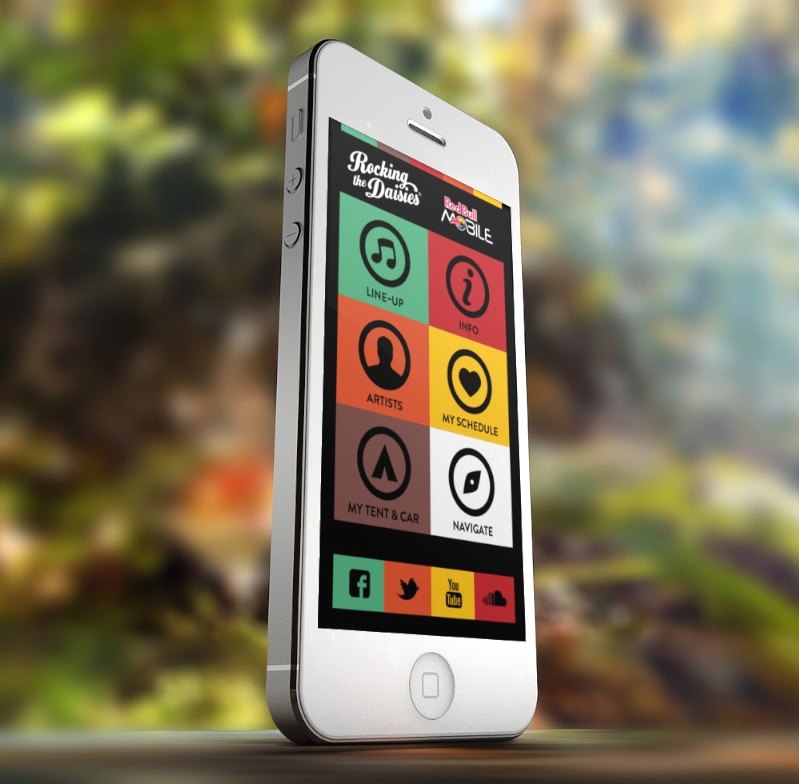 A mobile phone app was developed instead of a printed information booklet to provide festival-goers with information during the event. It was available for download at no cost for both iPhones and Androids. The app included the full line up, general information, summary of artists and a map. There is an interactive section where people can indicate their favourites and compile their own schedule. There’s even a function to mark the position of your car or tent so that you can find it readily. A total of 4309 people downloaded the app last year.

You could re-charge cellphones by means of a local company, RiCharge, who provided various options for festival-goers to recharge their phones through umbrellas with solar panels and recharge stations linked to the Eskom grid (but offset through the Darling Wind Farm).

Last year the use of print media was minimal, and significantly reduced in comparison to previous years. A few large plastic canvases (PVC) were used to provide information to festival-goers, with large material banners on the side of the stage. These are repurposed in the future, such as creating seating covers and décor for the Daisy Den. Reciprocal flyer drops on cars were once again not permitted. 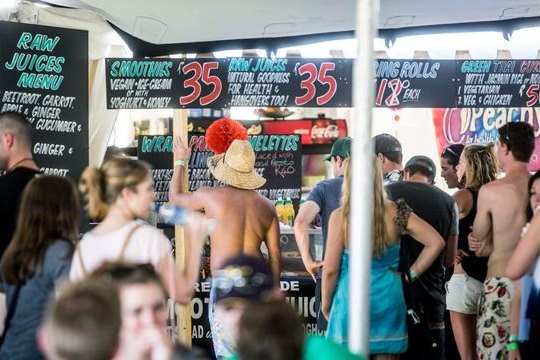 Butlers presented their pizza in environmentally friendly pizza boxes that were thinner than the usual boxes. Dedicated bins were also provided for recycling of pizza boxes and participants could win a year’s supply of pizzas by simply writing their name on their pizza box and placing it in the dedicated pizza box bin.

Better Earth biodegradable soap was provided to all the food vendors by the organisers to ensure that environmentally friendly products were used onsite. No other cleaning material was allowed onsite.

The Daisy Den has become a favourite among the ladies on-site, with clean toilets, hot water showers and a refreshment area with mirrors and hairdryers where ladies can prepare for the festivities. This is provided by the organisers at minimal cost to festival-goers. It was custom built on-site for the event by Felix Unite Tented Camps. 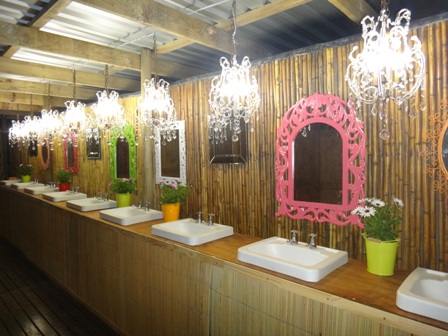 Econoloo transferred the sewerage from the event site to the Malmesbury sewerage treatment plant. It is recommended that a more permanent solution be considered for the waste water holding tanks next to Daisy Den.

The generators ran on diesel and it is recommended that renewable energy certificates be bought from the Darling Wind Farm via the City of Cape Town, as was done in the past. Most vendors and essential services (VOC, medics, Daisy Den) were using energy efficient lighting. The green village was powered predominantly by solar power.

Festival and crew t-shirts were locally manufactured from locally grown combed cotton, while some products made from hemp were also sold.

Waste Reduction and ‘pick up your shit’

The generation of waste was actively reduced during the planning and implementation of the event. Separation at source was encouraged for recycling, raising awareness and reducing waste to landfill.

While the pro-active management of waste was an important aspect to the event organisers, the increase in the number of festival-goers resulted in large amounts of waste being generated. So whilst the total tonnage of waste generated was increased,  the percentage of waste diverted from landfill increased from 62% to 70%.

Yet there were once again large amounts of litter left over at the end of the weekend. Unfortunately the visual impact of the waste left in the campsite after the weekend has a negative impact on people’s perception of the overall event greening. All the litter was cleared up appropriately and recycled where possible.

Compliments to the cleaning team that picked up the litter in the general festival area as fast as it was being generated. Considering the large number of people on-site it was remarkably clean there the whole weekend.

Banned bottled water snuck in due to heat

All the water was sourced on-site from the farmer and provided to festival-goers at no cost. As in the past vendors and traders were not allowed to sell bottled water, but it was noted on more than one occasion that bottled water was being sold. Sadly there were not enough water points, as it was a very hot weekend, so people needed to keep rehydrated. Limited bottles of water were available back-stage for artists before performing, as they often take it onto stage with them.

Focus was placed on using reusable items instead of disposable items and the investment from previous years is starting to pay off. Sponsors reduced their novelty handouts, which also helped to reduce waste created.

Bins were placed all around the festival site and were well labelled, both at eye level and above the bins for ease of location from a distance. The largest problem was still the campsite, despite the allocation of bins. 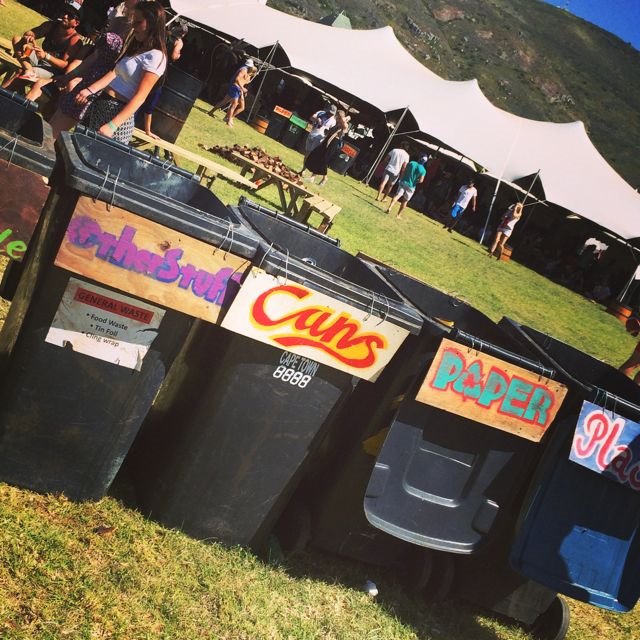 There was an on-site central waste collection area (smaller than 90m3). Vehicles were used to transfer the waste from across the festival site to this collection area, from where it went for separation off-site to Highlands Landfill and Material Recovery (Recycling) Facility in Malmesbury.

Once all the recyclables had been removed the rest of the non-recyclables were safely disposed of and a certificate of disposal was issued by highlands Landfill in Malmesbury.

TrashBack, a local community organisation that encourages a pro-active approach to waste management through showing people that waste has value, supported the waste initiatives on site. They exchanged various goods (meals, drinks etc.) for waste and it was well received. The TrashBack team collected a total of 450 bags of waste. 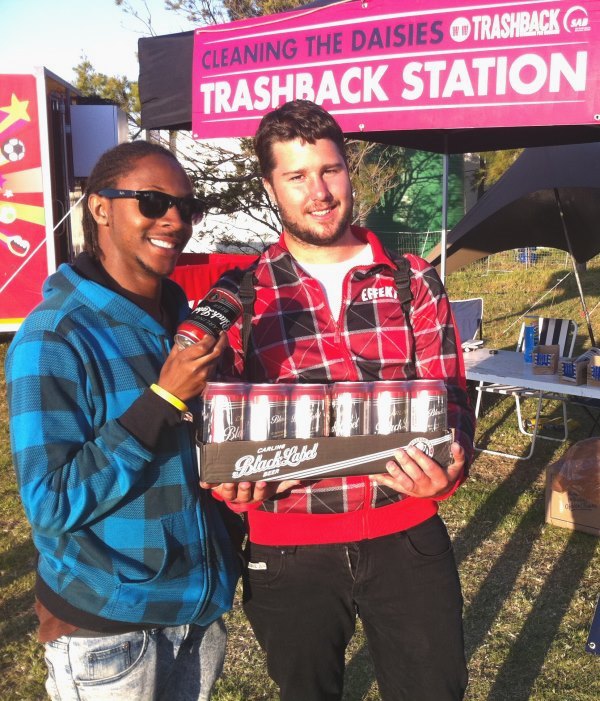 In the past they focused on cigarette butts, as this way all the litter will be picked up. This is far more complicated if left for the cleaning team to do at the end and leaves a larger negative impact if not removed. This is toxic waste.

Bio-ware only good if composted

Organic waste has been separated from waste to landfill for the last few years, but last year a more comprehensive programme was implemented with Bokashi Bins provided to each of the vendors. This helped to increase the organic waste collected from 1200kg to 4080kg.

Unfortunately a large amount of compostable food containers still landed in the general waste bins and were not sent for composting.  There is little value in providing compostable containers if they simply go to landfill.