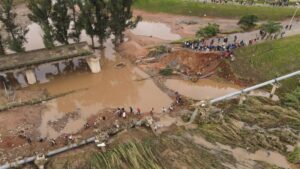 Barely two weeks after the Presidential Climate Commission (PCC) visited KwaZulu-Natal to engage communities on climate change and the just transition, the province was hit with the worst floods we have ever seen. No longer merely environmental activist rhetoric, the floods are just more evidence that climate change is real and has devastating impacts, especially for marginalised communities.

As a country, we witnessed the loss and destruction. We must recognise that Mother Earth’s health is failing because of human activity, and it is high time that we comply with the global ‘dietary’ standards (as prescribed by climate science) to reduce carbon emissions.

We can no longer deny the science, climate change causes extreme weather events, such as flooding from uncharacteristic heavy rains. According to the UN’s IPCC Report, “increased heatwaves, droughts and floods are already exceeding plant and animal tolerance thresholds, driving mass mortalities in species such as trees and corals.” Just as “we are what we eat”, we are responsible for the appalling state of our Earth and the devastating impacts of climate change, as we are the ones guilty of poisoning her. Still, we continue to find more ways to pollute her system. As we advance in technology, we have become even more focused on profit-making, often forgetting who we are and where we come from. We have forgotten to respect our source of life.

Since the advent of industries, we have been on a bullet train of destruction, all in the name of development and advancement of the human race. To me, this is a fallacy, since it is greed that continues to push many to keep searching for ways to amass wealth. To feed the beast of our insatiable desires. There are many among us who behave like spoiled brats, constantly taking but putting back very little into restoring the Earth.

Let us take a moment to diagnose the Earth’s health issues, largely the result of years of feeding her ozone layer with harmful gases – such as nitrous oxide, methane, water vapour, carbon monoxide, and sulphur dioxide – from burning fossil fuels and such. Then we went on to cut down the forests and drill and pollute the oceans. We are still burning coal for electricity and continue to excavate land for minerals. These are just some of our actions contributing to Earth’s unhealthy diet, which have caused our Mother malnutrition (drought), poor digestion (ozone layer holes), inflammation (extreme heat), weight gain and obesity (heavy rains and floods).

Having the best technology did not mean much to those trying to survive the KZN floods. Not even the most technologically advanced vehicles could save themselves, getting trapped and washed away with lives inside. We also saw some of the best infrastructure, built with master engineering, collapse. And the genius bridges and roads built with ‘alien’ intelligence, were swept away. We all witnessed this. We all went to Easter prayers with fear as the clouds turned black and drops of rain descended. We feared the worst. There was no farmers’ embrace for the rain. Instead, we feared that we would not be saved from the raging waters. It is that moment we remembered, for the first time, that the money we eagerly chase will not save us when Mother Earth reacts to her illness.

With our Earth clearly limping, we cannot simply hope or be in invocation alone, we must take action to restore her health, so she can take care of our children and children’s children, as she did for our ancestors and for us.

Let us take a moment to remember the lives lost in the floods – young men and women, who were the hope of this country. This is a massacre by ignorance. We have ignored the health of our Earth for too long and now we pay the biggest price. Still, these are situations we could have mitigated, yet we allowed ourselves to be manipulated by the pageant affair of social media that has made human suffering a trending issue rather an emergency requiring urgent response. In the words of John Donne “no man is an island” and since the floods are really a culmination of collective environmental abuse, these disasters should not be seen as isolated to that province alone. We all have a responsibility to change our behaviours. We need decisive climate action now.

In closing, let us come together and participate in the President’s plan to avert such disasters, through the Presidential Climate Commission. Let us participate in the consultations and give voice to the Just Transition Framework for a low carbon diet for our Mother. This will save our lives, our jobs and our Earth. We need the just transition, as it seeks to nourish our Mother, while at the same time, securing the livelihoods and futures of our children. If we can walk this walk together, in truth, no-one will be left behind and we will forge a pathway to a new Earth diet which includes solar and wind (and other renewable energy sources) for tomorrow’s generations.