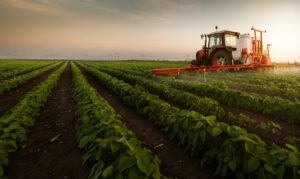 The SA law that’s supposed to protect us and the environment from agricultural chemicals was written in 1947!

A growing body of evidence internationally is suggesting that glyphosate, the active ingredient in some weedkillers, may be responsible for certain cancers. It’s banned in several countries and at the heart of multi-million rand legal claims by people in the United States claiming it causes cancer.

Nonetheless, South Africans use it widely in agriculture and its even on supermarket shelves for use in home gardens.

Carte Blanche investigated why legislation allowing the chemical has not been updated since 1947 to account for the right to a clean and healthy environment promoted in our Constitution.

The beauty of cultivated farmlands belies a disturbing truth: that much of our soil can no longer support life. Over-farming, pesticides and chemicals have stripped the nutrients from massive regions of the earth.

But Carte Blanche investigated the groundswell of people who are determined to bring the soil back to life.

From farmers who have made the switch to organic ways of working the land, to innovators who are making nutritious food out of thin air – it’s becoming increasingly possible to disconnect food production from agriculture and restore life to the soil.