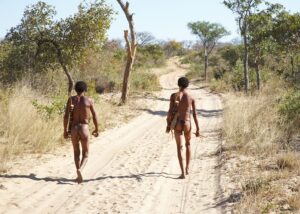 Internationally renowned Corona Studios has launched in South Africa with the premier of its first locally produced film, Between San and Insanity, in an oasis-themed outdoor cinema and desert bar set on Nelson Mandela Square (on Thursday, March 10th), complete with five tons of sand and Khoi and San art.

The release of Between San and Insanity announced the arrival of Corona Studios, one of the world’s largest in-house digital content entertainment franchises in the country with a commitment to release four locally produced short format shows this year.

A short format documentary film, Between San and Insanity follows South African environmental activist and pro-Surfer Frank Solomon as he disconnects from technology and leaves big city living behind for the Namib desert, to seek guidance and wisdom from the San people.

“By the end of lockdown, I had reached a dead end. Being stuck indoors and deprived of nature made me feel unlike myself and I was starting to get concerned about my state of mind. I knew something had to change and that disconnecting from my screens and technology was what I needed to do, in the most humbling of settings,” says Frank Solomon.

The short format film was shot on an epic scale by director Arthur Neumeier and captures both the breath-taking grandeur of the desert and Frank’s integration into the San people who have lived unchanged in this environment for thousands of years, and through whom he reconnects with nature – and himself – in the process.

“The San are so intimate with nature and their cultural wisdom deeply moved me. They taught me that by living with and respecting nature, we can change our ways to live a more connected life,” adds Frank.

Corona Studios launched internationally last year with the successful Free Range Humans series, a short-format, global lifestyle Show about a group of eight people (including two South Africans) who, each season, had chosen to leave their conventional jobs to live the authentic lives they’ve always dreamed of, outdoors.

“All of Corona Studios’ local productions will place emphasis on the ethos of being close to nature, the beauty of Southern Africa and life in the outdoors. Most people spend 95% of their time indoors and we believe outside is where we believe we are our best selves,” says Melanie Nicholson, Corona SA Marketing Manager.

“Between San & Insanity is the first of our major projects and we’re inviting film makers and storytellers to present their ideas to us.”