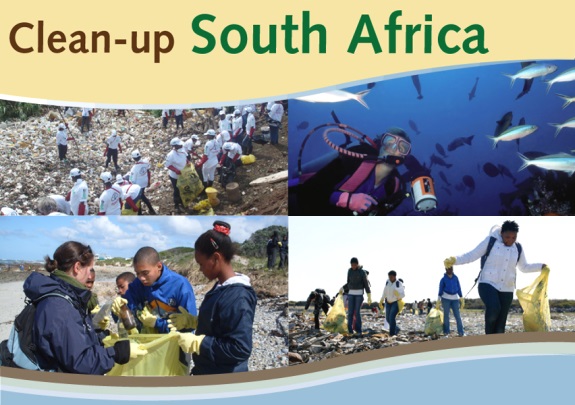 September is traditionally the month in which South Africans from all walks of life are encouraged to “spring clean” the environment in celebration of the arrival of spring.

This year, the annual Clean-Up and Recycle Week will be taking place from the 15th to the 20th of September, culminating in National Recycling Day on Friday, 19 September and the 29th International Coastal Clean-Up Day on Saturday, 20 September.

Explains Douw Steyn, Director of Sustainability at Plastics|SA and Chairman of the National Recycling Forum (NRF):

“Plastics|SA has been the coordinator of Clean-up events such as the International Coastal Clean-up Day and the National Recycling Day for almost 20 years. It originally started out as a plastics industry and KZN Wildlife drive in 1996, during which we aimed to educate the public that plastics don’t litter… people do. Since then, our awareness week has developed into an annual, countrywide event during which communities are encouraged to launch their own clean-up and recycle initiatives where they live, work or play”. 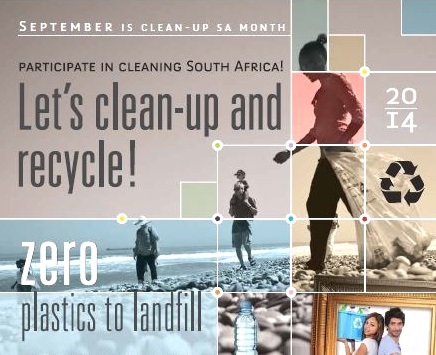 Clean Up and Recycle Week enjoys the support and involvement of the National Recycling Forum (NRF), as well as all of the players in the packaging industry (including the glass, cans,  paper and board, and oil converters and recyclers) as packaging leaders unite around the common goal of creating litter-free streets, rivers and beaches through mobilizing local communities to make a difference in their own neighbourhoods.  These events are also supported by Brand SA, KZN Wildlife, Tuffy Manufacturing, PicknPay, Garbie (ASTRAPAK) and the Department of Environmental Affairs (DEA).

National Recycling Day on Friday, 19 September 2013 encourages schools, businesses and communities to recycle.  Although recycling has become second nature to many people, research shows that the majority of our population still doesn’t recycle as an everyday way of life.

“This is one day of the year that we are making an appeal to South Africans to consciously recycle their plastics, cans, glass, paper, cartons, oil and e-waste and in order to reduce the pressure on our country’s landfills.  Support the recycling industry by taking your recyclables to a recycling facility near you or by separating your recyclables from your wet waste for curbside collection.

The 29th International Coastal Clean-Up Day on Saturday, 20 September 2014 will once again see South Africans from all walks of life participate in one of the world’s biggest volunteer efforts for ocean health.

Clean the beaches on 20 September

Each year, thousands of kilograms of almost every imaginable type of waste is removed along the world’s shorelines. South Africa is recognized as one of the leading participants in this clean-up initiative.

“This year, Plastics|SA will once again be coordinating beach clean-ups, as well as similar clean-up initiatives at rivers, streams and water sources inland. We are encouraging people to give two hours of their time on that Saturday to help clean our country’s water sources and beaches,” Steyn says.

“Mother Nature supplies us with the food we eat, the air we breathe, and the water we drink. If our environment isn’t clean and healthy, neither are we. We therefor urge all South Africans to clean up the environment in order to give future generations a hope of a sustainable future. The local plastics industry has set itself a vision of sending Zero Plastics to Landfill by the year 2030. We need everybody’s help in reaching this target,” concludes Steyn.