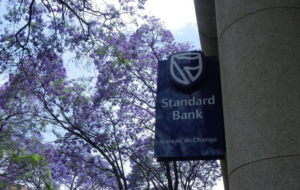 Standard Bank’s Notice of Annual General Meeting, released on 17 April 2019, includes a resolution proposed by shareholders that would require the bank to prepare a report on its exposure to climate risk in its lending, financing and investment activities.

This is the first time that a South African company has tabled a shareholder resolution on any climate-related issue. While the Standard Bank board recommends that shareholders vote against the resolution, its decision to table the resolution – which was proposed by the RAITH Foundation and shareholder activist Theo Botha, with support from Just Share – is significant and ground-breaking.

Standard Bank notes correctly that section 65 of the Companies Act permits shareholders to table resolutions for voting at the company’s AGM. This is in stark contrast to Sasol, which refused to table a climate risk resolution proposed by RAITH and Botha in 2018. Sasol’s refusal was based on a legal opinion it had commissioned, but refused to share, to the effect that climate change issues do not constitute matters that shareholders are entitled to exercise voting rights on.

Tracey Davies, executive director of Just Share, says: “We commend Standard Bank for recognising the rights of shareholders to table resolutions on critical issues like climate change. This is a ground-breaking step that shows courageous leadership, and which will dramatically alter the landscape of shareholder activism and responsible investment in South Africa.”

If passed with more than 50% of the voting rights exercised on the resolution, it would require Standard Bank to:

report to shareholders its assessment of the greenhouse gas emissions resulting from its financing portfolio and its exposure to climate change risk in its lending, investing and financing activities, including:

The Standard Bank Board has recommended that shareholders vote against both parts of the resolution. This is despite Standard Bank issuing a media release on 15 April setting out new parameters for its funding of coal-fired power stations, with the effect that the bank will no longer provide finance for the development of the proposed Thabametsi and Khanyisa independent coal-fired power stations. However, the policy itself is not publicly available, and there is no reference to coal mining operations in the media release.

The Board’s recommendation to vote against the resolution is also counter to the recommendations of the international Task Force on Climate-Related Financial Disclosures (TCFD), which an increasing number of banks around the world are using to frame their climate-risk disclosures.

When the TCFD was established in December 2015, a key motive was to “enable stakeholders to understand better the concentrations of carbon-related assets in the financial sector and the financial system’s exposures to climate-related risks.”

It also makes sense for Standard Bank to carry out such an assessment, given its own acknowledgment that “climate change, coupled with the related issue of water scarcity, has emerged as a leading risk for business and society”.

Davies said: “Many of the institutional investors which hold shares in Standard Bank have made commitments to their clients about responsible investment. They invest money on behalf of millions of people who are becoming more and more concerned about climate change. This resolution simply asks for more detailed disclosure on climate risk, which is essential information for shareholders given the material financial risk posed by climate change. There is no plausible reason for those investors to vote against it.”