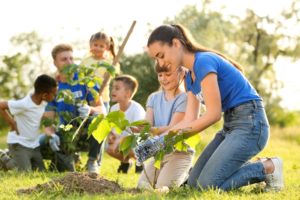 Several projects from 2014 up until 2021 have been aimed at greening the communities within the Stellenbosch Municipal boundaries and restoring the ecosystems, especially catchments and rivers in the area.

The Stellenbosch Project had its roots in the Million Trees Project, initiated in April 2014 by then Stellenbosch Mayor, Conrad Sidego, as a partnership between the Stellenbosch Municipality, Leaf-a-Legacy and the WILDLANDS programme, which aims to plant up to one million trees in and around Stellenbosch.

Approximately 75 previously disadvantaged men and women were employed in the WILDLANDS Stellenbosch projects over the years and provided with accredited training under the Natural Resource Management (NRM) program of the Department of Forestry, Fisheries and the Environment. In addition, the WILDLANDS’ Ubuntu Earth Ambassadors Program conducted approximately a dozen environmental education outreach activities every year in these communities.

Five major rivers (Eerste, Blaauwklippen, Plankenbrug, Krom- and Dwars), a nature reserve (Papegaaiberg Nature Reserve) and two Conservancies, Banhoek and Simonsberg, were targeted for ecological restoration. 567 hectares were cleared of alien invasive plants from July 2014 until March 2019, and an additional 250 hectares of riparian zones of the major rivers since July 2019 to March 2021 under the Stellenbosch River Stewardship Action in collaboration with the Stellenbosch River Collaborative (SRC).

“Never doubt that a small group of thoughtful, committed citizens can change the world; indeed, it’s the only thing that ever has.”

The riparian rehabilitation was enabled via the training of “tree-preneurs” about how to ‘grow’ themselves out of poverty by propagating indigenous trees and bartering these trees for livelihood support. Despite a severe drought, the total of 12,216 trees were grown and planted back in riparian river areas from 2014 until March 2021. The number of livelihoods changed in the last 5 years included 78 tree-preneurs and 190 dependants. Shoprite vouchers to the value of approximately R 9000 were consistently bartered for trees every year in 2016, 2018, 2019 and 2021.

In Stellenbosch a special partnership with Qhubeka Bicycles saw three local schools trading 463 bicycles for trees in 2016 and 178 Qhubeka bicycles with Kayamandi High School and Rietenbosch Primary School in April 2018. WILDLANDS also bartered more than 200 Qhubeka bicycles with these schools from March 2019 to March 2021 to the value of R6416 before the Qhubeka project ended.

In 2018 the very successful Commemorative Trees Project was launched in collaboration with Stellenbosch Trail Fund and Trees-SA. This project enables the Stellenbosch community to donate mature trees to commemorate their loved ones and a total of sixty-seven trees were planted and cared for in rehabilitation sites to date. Each donor receives a commemorative plaque at ‘their’ tree along the pedestrian and biking paths next to the river, linking parks and recreational areas along the banks of this iconic Eerste River.

“We would like to honor the Stellenbosch residents, corporates, the Stellenbosch University and Municipality, Paul Roos Gymnasium, business owners and locals for their support and contribution to our natural heritage,” said WILDLANDS Project Manager, Lydia van Rooyen.

A key partner on these projects – Trees-SA, received a Bronze Award of Excellence in 2021 from the South African Landscapers Institute (SALI) for the Eerste River Commemorative Trees Project.

“Having planted many large trees over the past 20 years all over South Africa, we are overjoyed to be able to come back to our roots in Stellenbosch and provide a growing legacy to these families of the town,” said Trees-SA Managing Director, Kalika Redelinghuys.

The collaborative Green Filter project, as sponsored by Global Nature Fund (GNF), SIKA and Kärscher SA, is an out-of-stream installation, based on the John Todd Ecological Bioremediation principles, to naturally filter river water with indigenous plants in a series of water tanks. This ecological treatment facility was constructed in March 2016 by Isidima Development and Design and Biomimicry SA. After a year the original site next to the Plankenbrug River proved problematic in terms of safety, vandalism and general maintenance, and was moved to a more secure site on DISTELL property at the lower Eerste River.

WILDLANDS negotiated a partnership with the Stellenbosch University Water Institute (SUWI) to undertake scientific monitoring and testing of the Green Filter technology with the assistance of post-graduate students. The scientific research will provide evidence on bioremediation technologies for the future of our rivers. The fenced and shaded site around the Green Filter was kindly sponsored by KaapAgri.

Significant collaboration with the Centre for Invasion Biology, and the Department of Conservation Ecology and Entomology saw a few postgraduate publications and research projects with the Water Research Council (WRC), the W12 Congress, SEBEI (Socio-economic Benefits of Ecological Infrastructure), most notably in the Dwars River. These Stellenbosch, Upper Berg and Banhoek catchments are major water suppliers to Western Cape dams for the agricultural section and the City of Cape Town to which the WILDLANDS’ alien clearing and river rehabilitation contributed significantly.

“We are in the last planting phase with the winter rainfall in the Western Cape and with Arbor week around the corner we wanted to honor and acknowledge all our partners, the people of Stellenbosch and especially the WILDLANDS team for their support and contributions to our natural heritage. We couldn’t have done this without you,” concluded van Rooyen.