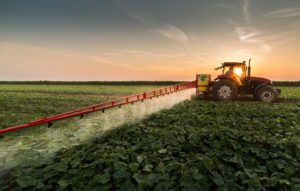 The analysis was initially published in 2019 and has now been peer-reviewed by independent scientists and published in the renowned journal Environmental Sciences Europe.

It was commissioned by the Bündnis für eine enkeltaugliche Landwirtschaft and the Umweltinstitut München and is the most comprehensive data set on pesticide pollution in the air in Germany. However, the EU authorities responsible for the approval process concerning the use of glyphosate have so far excluded air transport.

“The EU approval process for glyphosate is built on false facts. Our study, which has now been reviewed by an independent scientific panel, shows that the agricultural toxin binds to dust particles and is carried through the air for many miles into the country. Glyphosate ends up in protected natural areas, on organic fields and in the air we breathe. Glyphosate must not be re-authorised under any circumstances.”

In the peer-reviewed study Pesticides and pesticide-related products in ambient air in Germany, the agricultural toxin glyphosate was detected at every single one of the total 69 measuring points distributed throughout Germany. It was found far away from potential fields of origin, even in national parks like the Bavarian Forest or on the Harzer Brocken. Glyphosate is classified as “probably carcinogenic to humans” by the World Health Organisation (WHO) and has a devastating effect on insects and their habitats.

Christine Vogt, expert for agriculture at the Umweltinstitut München:

“It has now been clearly proven that agricultural toxins spread far more than what was assumed by the approval authorities so far. We call on the EU authorities to incorporate these scientifically confirmed findings into the re-evaluation of glyphosate. Anything else would be an act of gross negligence.”

Currently, the public participation process for the re-authorisation of glyphosate from 2022 is underway. The Bündnis für eine enkeltaugliche Landwirtschaft and the Umweltinstitut München therefore submit the study Pesticides and pesticide-related products in ambient air in Germany to the relevant authorities.

In addition to glyphosate, dozens of other pesticides were recorded in the ambient air as the study shows.

“We detected 109 different pesticides, including 28 that are not approved for use in Germany,” says Dr. Maren Kruse-Plaß, lead author of the study and scientist at the research office TIEM Integrated Environmental Monitoring, which conducted the analysis.

“At each sampling site, we identified at least one pesticide. In most of them, there were several active substances, and at one site there were even 36 different substances. We have a chemical cocktail in the air whose effects on humans and animals are completely unknown.”

The Bündnis für eine enkeltaugliche Landwirtschaft and the Umweltinstitut München support the demand of the European Citizen’s Initiative Save Bees and Farmers to gradually ban all synthetic pesticides in the EU by 2035. In the meantime, the European pesticide approval process must take the long-range transport of pesticides via the air and the combination effect of different active substances into account. The process for authorising glyphosate after 2022 is a good place to start.