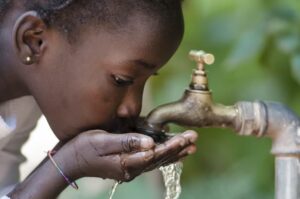 South Africa can significantly improve water and energy efficiency by aligning its tap labelling programme with international standards, according to a new study released ahead of National Water Week, happening from 20 to 26 March 2022. The week aims to raise awareness and call to action renewed value for this scarce resource.

In 2018, the National Water and Sanitation Master Plan identified a water supply deficit of 17% by 2030 for the country, putting water efficiency under the spotlight at a time when parts of the country were feeling the pinch of prolonged drought conditions.

The Master Plan also targets developing a water efficiency labelling scheme for taps and fixtures by 2025 in line with international standards.

The South African National Energy Development Institute (SANEDI) and CLASP spearheaded the study by independent experts, which culminated in a report titled “In-depth Assessment of Water Efficiency Opportunities in South Africa” report. This report found that standards for taps and showerheads could address the country’s linked water and energy crises by reducing the use of water and electricity needed to heat some of that water. CLASP is an NGO that focuses on appliance and equipment energy performance and quality, to mitigate and adapt to climate change and expand access to clean energy.

In response to this goal, the South African Bureau of Standards (SABS) Special Committee, participated in the International Standards Organisation (ISOA) project to develop an ISO standard for water labelling systems. The SABS considers the standard, once published, to be applied to establish a water efficiency labelling program in South Africa.

In establishing a water efficiency labelling program, there must be “uniformity between the requirements of all related South African National Standards (SANS) and international tap standards. Therefore, the gap analysis performed in this study aims to present recommendations to allow for such uniformity,” the report states.

“This report seeks to advance water and in turn, energy efficiency in South Africa by making recommendations for alignment to international standards which have improved efficiency globally. It encourages a “flow follows function approach” in the labelling and standardisation of taps and installations.” said Ashanti Mogosetsi​ Project Manager for Appliance Standards and Labelling at SANEDI.

South Africa predominantly imports commercially available taps. To solve the problem of inefficient water use – which can typically increase utility bills – countries are increasingly standardising taps and fixtures to maximise water-saving. Among the recommendations of the report are that, when South Africa implements the labeling program as per the master plan, water flow rate targets should be set to improve water efficiency, while labelling should be defined by the function of the faucet.

The report suggests the best minimum and maximum flow rates that would not compromise the user’s experience. The report recommends that the South African National Standards should introduce uniform descriptions of tap types and consider where the taps will be used, as well as its functions. It warns of unintended consequences in which flow rates are reduced to save water but users end up showering longer, for example.

Toilets, taps and showers typically consume 40-60% of the total annual potable water use in domestic and commercial areas. This is why water efficient fixtures installed in taps for various users typically save water, energy and costs in both commercial and residential buildings.

“CLASP is pleased to release this important study to the public alongside SANEDI in hopes that the relevant sectors will engage the report findings ahead of the finalisation of government’s labelling programme,”says Monica Wambui, Senior Associate at CLASP East Africa.

Businesses and homeowners pay for water three times; buying, heating and disposing of the wastewater.

‘We encourage South Africans to engage with the report and take steps to align their plumbing needs with the country’s evolving regulatory framework. Conserving water also conserves energy, which reduces your annual water and electricity bills.” concluded Ashanti Mogosetsi​.