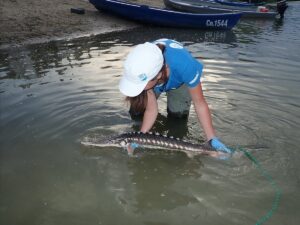 The new assessment carried out by members of the IUCN Sturgeon Specialist Group (SSG) found that almost 2/3rds of sturgeon and paddlefish species are Critically Endangered – underlining their claim to be the world’s most threatened group of species. It highlights the continuing loss of freshwater biodiversity and degradation of rivers across the globe, which are essential to people and nature.

“The world’s failure to safeguard sturgeon species is an indictment of governments across the globe, who are failing to sustainably manage their rivers and live up to their commitments to conserve these iconic fish and halt the global loss of nature,” said Arne Ludwig, Chair of the IUCN Sturgeon Specialist Group.

“These shocking – but sadly not surprising – assessments mean that sturgeon retain their unwanted title as the world’s most threatened group of species.” 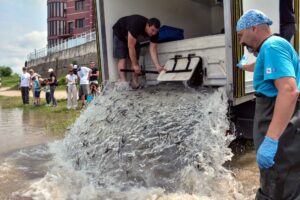 Despite ambitious policies to protect sturgeon species in Europe, including the Pan-European Action Plan for Sturgeons accepted by the Bern Convention and the EU Habitats Directive, the status of sturgeons continues to worsen across the continent. Seven of the eight European species were already listed as Critically Endangered. Now the sterlet, the smallest, purely freshwater sturgeon, has been moved to a higher threat category – and is officially classified as Endangered.

One species, the ship sturgeon, has now been declared extinct in the Danube, the species’ last refuge in the EU, marking the rare extinction of a species protected under the EU Habitats Directive to completely disappear from EU territory. In fact after the Birds and Habitats Directives entered into force in 1979 and 1992, so far only one bird species and one ibex subspecies had gone extinct in the EU – until now.

From initially six sturgeon species in the Danube, only four remain in the Green Heart of Europe. Yet the Danube is one of the last rivers in Europe where sturgeon spawn naturally. 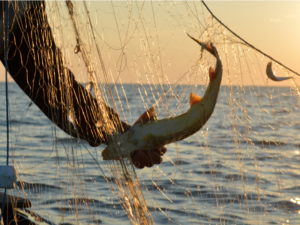 “Sturgeon species are bound up with our culture and cuisine. For centuries, they sustained fishing communities across the continent, but now their future in Europe hangs by a thread,” said Beate Striebel-Greiter, WWF Lead at the Global Sturgeon Initiative.

“The loss of the ship sturgeon from the Danube demonstrates the urgency to implement the Pan-European Action Plan for Sturgeons, including measures to ensure upstream and downstream migration,” added Striebel-Greiter.

“There are no excuses for the current lack of action and no one else to blame: if governments across Europe, in particular the Danube states, and EU institutions do not act now to restore river connectivity and protect and restore sturgeon habitats in key rivers, the extinction of more sturgeon species will be on their hands.” 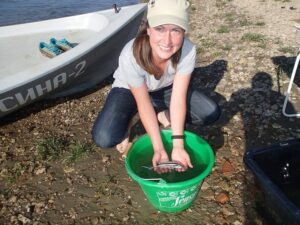 Despite the depressing overall picture, there are some slight glimmers of hope. While the sub-population of ship sturgeon in the Aral Sea has long since disappeared and populations in the Sea of Azov and Caspian Sea have plummeted, there have been a few recent sightings of young ship sturgeon in Georgia’s Rioni River. So the recent expansion of a protected area for sturgeon in the Rioni and adjacent Black Sea is now of even greater importance.

In addition, following 30 years of restocking, young Adriatic sturgeon – a species that was previously thought to be extinct in the wild – have been documented in Italy, while some incredibly rare Amu Darya shovelnose sturgeon have been found in Uzbekistan – suggesting that these populations are still breeding and could potentially be revived.

Meanwhile, there is brighter news across the Atlantic where long-term conservation efforts in North America have stabilized and sometimes even slightly increased sturgeon populations, including the white sturgeon in the Fraser River in the US. 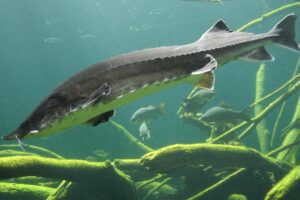 “These successes show that we can reverse the declines in sturgeon species as long as institutions and governments prioritize their conservation and join forces with communities and conservationists to tackle the threats to them and their rivers,” said Paolo Bronzi, President of the World Sturgeon Conservation Society (WSCS).

“By saving sturgeon, we will save so much more – because enhancing the health of sturgeon rivers benefits all the people and nature that rely on them.”

Across the world, sturgeon face a myriad of threats including poaching for the illegal trade in wild caviar and meat, hydropower dams blocking their migration routes, unsustainable sand and gravel mining destroying their spawning grounds, and habitat loss. 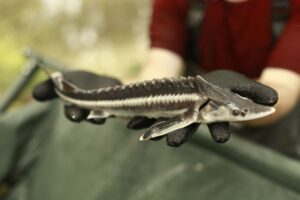 Therefore, restocking measures alone will not be sustainable if conservation measures in parallel do not also address these causes of decline in a holistic way, taking into account the available knowledge at genetic, biological and ecological levels.

IUCN, WSCS and WWF are working with partners to save these species through scientific research, awareness raising and directly engaging in conservation projects to bridge the gap between science and management.

“We unanimously call on sturgeon range states and consumer countries to stop turning a blind eye to the extinction of sturgeon and implement the solutions they know can help save these iconic species,” said Striebel-Greiter.

“We have a choice: create a future with thriving sturgeon populations and healthy rivers and communities, or stick with today’s failed policies and end up with dying rivers and no more sturgeon.”