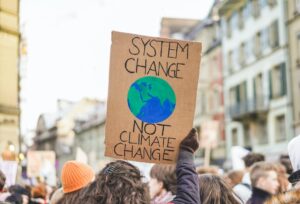 Existing political, economic and legal systems have not only failed to prevent the climate crisis from accelerating, they have facilitated, legitimised and encouraged it – despite proof of its disastrous consequences.

This has led activists around the world to call for ‘Systems Change, Not Climate Change’, as they recognise that addressing the climate crisis effectively requires systemic, transformative change.

What is Earth Jurisprudence?

Earth Jurisprudence is a philosophical approach, which views human governance and legal systems within the context of natural systems. It recognises that humans are a part of the Earth community, neither separate nor superior, and that our well-being derives from the well-being of Nature as a whole. All beings are subjects of the law, not objects, and have inalienable rights to exist and to be free. Therefore, the primary purpose of legal and governance systems must be to ensure that people protect and contribute to the integrity, health and well-being of the entire Earth community. You can find out more about Earth Jurisprudence in the first part of this series.

The climate crisis is an outcome of society’s belief that humans are separate from, and superior to, Nature and that it is desirable to maximise the exploitation of ‘natural resources’ in order to pursue unending economic growth. It is a symptom of deep, systemic problems. Climate stability cannot be restored merely by restricting emissions of greenhouse gasses – it also requires changing the forces that drive societies to exceed planetary boundaries. Earth Jurisprudence addresses these root causes by recognising that humans have a duty to uphold the inherent rights of all beings to exist and flourish, and to prioritise the well-being of Earth as a whole.

How does Earth Jurisprudence address the climate crisis?

Climate change is the result of humans emitting more greenhouse gases than ecosystems can absorb and degrading the ecosystems that absorb emissions from the atmosphere. This happens partly because Nature is treated as an everlasting resource to be exploited to maximise profit and contribute to GDP growth. Most of the human activities that are causing climate change are perfectly legal and some are even incentivised.

This is legally permissible because the law defines all of Nature (other than human beings) as property which cannot have rights. If Nature has no rights, it may be exploited by humans in any way that is not explicitly forbidden by law, even if doing so harms the Earth community as a whole (e.g. by causing climate change). In order to address the climate crisis effectively, we must change how we relate to Nature and transform our governance systems.

Changing our perspective on Nature

In order to avert climate chaos and the collapse of ecosystems, we need to accept the reality that we are part of Nature, must live within ecological limits, and seek to co-exist harmoniously with other beings. Recognising that all members of the Earth community are beings that have inherent and inalienable rights requires humans to see them as subjects rather than objects to be owned. This means that we must consider how we relate to other beings and create universal human duties to respect and uphold the rights of others, as with human rights.

This forms the basis of the Earth Jurisprudence philosophy – a philosophy that expands the scope of our existing legal systems and requires considering human rights within a context of the rights of others, in order to make decisions that are in the best interests of the community of life as whole. Ultimately, Earth Jurisprudence seeks to protect the well-being of all members of the Earth community, including humans.

Transformative change is needed to addresses the root causes of our current crises.

To quote Albert Einstein, “We cannot solve our problems with the same thinking we used when we created them.” However, this thinking can be seen with policies such as carbon trading and geo-engineering. Carbon trading creates a commercial product out of carbon, enabling it to be bought and sold. In other words, it commodifies the carbon cycle by allowing polluters to purchase credits that will allow them to continue polluting. It has failed to work and produced numerous social and environmental injustices in the process.

Geo-engineering, the large-scale intervention and manipulation of the Earth’s systems to counteract climate change, is an approach to addressing climate change that works in direct opposition to natural systems. By manipulating ocean chemistry, or the reflectivity of clouds, numerous other threats emerge including to air quality, water availability, and biodiversity, not forgetting the immense economic and social risks, given the failure to fully consider the interconnectivity and interdependence of all the Earth’s systems.

Litigation is already being used as a tool to address the climate crisis, including by recognising the impacts of climate change on human rights. While this has been successful in some cases, and will continue to grow as the impacts of climate change increasingly violate human rights across the globe, it is a limited approach because it only addresses climate impacts on humans. However, climate change also has significant, negative impacts on other species and ecosystems. By recognising the rights of Nature, rights-based litigation can be expanded and utilised in new and innovative ways.

A rights of Nature approach would also reduce the burden of proof typically required in climate litigation. It is often necessary to prove that emissions by a particular source have substantially contributed to climate change, and that climate change is directly linked to any particular harm caused. This is often difficult to prove given the diffusive and cumulative nature of greenhouse gas emissions.

However, by recognising the interconnectedness of the Earth’s systems in a rights of Nature-based approach, it is clear that any substantial greenhouse gas emissions are harmful in general and must be prevented.

Earth Jurisprudence is based on the understanding that humans are a part of the Earth community, and that maintaining respectful relationships with the other members of that community is essential. This has long been recognised within many Indigenous and African cultures, which have been far more successful at preserving the ecosystems within which they live than the dominant, colonial cultures.

Earth Jurisprudence recognises that Indigenous Peoples and other communities that maintain close relationships with Nature have both a duty and right to defend the rights of other beings within the ecosystems that they share. This provides a strong legal basis for local communities to resist being removed from their ancestral lands, to say no to harmful developments in those areas and to proactively protect the landscapes, water, air, and soil.

There is not only one Earth Jurisprudence. Rather, it is ‘bio-culturally specific’, originating from how different human communities understand how to regulate themselves as part of the Earth community. This lends itself to a shift away from international agreements and top-down approaches to governance, all of which have been wholly inadequate to address environmental crises and have perpetuated social injustices.

The Earth Jurisprudence approach is relevant to numerous other struggles and topics. It provides a new perspective on theoretical debates and presents innovative, practical legal tools for addressing existing socio-ecological challenges. Some of these are currently under discussion via a series of short papers by the Wild Law Institute.