You are here: Home / Archives for acid rain 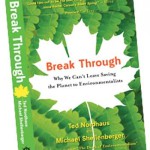 In the fall of 2004, two young environmentalists, Michael Shellenberger and Ted Nordhaus, triggered a firestorm of controversy with their essay, The Death of Environmentalism. In it they argued that the politics that dealt with acid rain and smog can't deal with global warming. Society has changed, and our politics have not kept up. Environmentalism must die, they concluded, so … END_OF_DOCUMENT_TOKEN_TO_BE_REPLACED