You are here: Home / Archives for airports 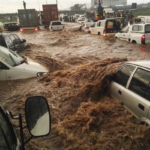 The South African weather services has warned that extreme weather conditions – which have led to heavy rain, strong winds, thunderstorms and flash floods – is likely to continue on Friday. The thunderstorms which have hit Joburg – causing chaos in the East Rand in particular – has been described as a “once in a century” storm. Flash floods have already claimed at least 6 … END_OF_DOCUMENT_TOKEN_TO_BE_REPLACED 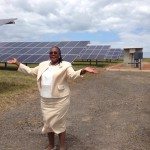 South Africa’s airports are heading towards energy self-sustainability. Yesterday was a proud day in my decades long green career, for there is some definite action to report. Not just clever green-washing. You know the likes of “we recycle, therefore we are green.” Yesterday Airports Company South Africa (ACSA) launched its first 200 square meter solar power plant at … END_OF_DOCUMENT_TOKEN_TO_BE_REPLACED