You are here: Home / Archives for Aquila Private Game Reserve 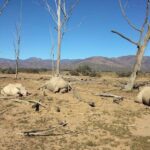 Searl Derman, owner of Inverdoorn Private Game Reserve, just outside of Cape Town in the Western Cape, South Africa, and his management and staff are left traumatised after four rhinos (including one pregnant female) were found massacred on Wednesday night. At approximately 22h30 the 24 hour Anti-Poaching Unit raised the alarm as they found the horrific scene of four shot … END_OF_DOCUMENT_TOKEN_TO_BE_REPLACED