You are here: Home / Archives for Arctic Circle 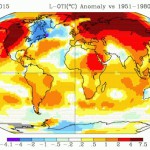 March this year was the third hottest month in global climate records, according to reports from NASA GISS. The reading — at +0.84 C above the 20th Century average — fell just behind March of 2002 (+0.88 C) and March of 2010 (+0.87 C). With El Nino firing off in the Pacific and polar amplification pushing to ever-greater extremes in the Arctic, 2015 is following hot on the … END_OF_DOCUMENT_TOKEN_TO_BE_REPLACED