You are here: Home / Archives for Cape Leopard Trust 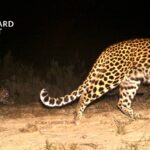 A female Cape Mountain Leopard (Panthera pardus) was recently captured on camera at Bushmans Kloof together with her cub, which is estimated to be between five and six months old. The photographic evidence was recorded by the stationary Cape Leopard Trust camera set up in the kloof behind the lodge, confirming that the reserve, adjacent to the Cederberg wilderness area, … END_OF_DOCUMENT_TOKEN_TO_BE_REPLACED