You are here: Home / Archives for CEMA 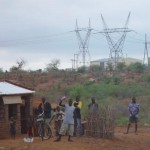 The Conference of Energy Ministers in Africa - a two-year old institution recognized by the African Union and donors as the official voice of Africa's energy future - recently met for the second time and released a new declaration that can fairly be called double-speak. The first half of the declaration is so great, it could have been written by a Nelson Mandela of energy. … END_OF_DOCUMENT_TOKEN_TO_BE_REPLACED