You are here: Home / Archives for coastline 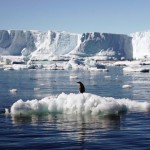 Parts of the vast ice sheet of East Antarctica – which collectively holds enough water to raise global sea levels by 53 metres – could begin an irreversible slide into the sea this century, causing an unstoppable process of global coastal destruction, scientists have warned. East Antarctica is widely considered to be more stable than the West Antarctic ice sheet but a study … END_OF_DOCUMENT_TOKEN_TO_BE_REPLACED