You are here: Home / Archives for Dakota Access Pipeline 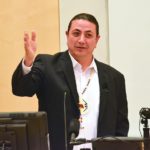 David Archambault II, chairman of the Standing Rock Sioux tribe caught in the crosshairs of a $3.7 billion oil development, pledged Thursday to fight President Trump on the Dakota Access pipeline just two weeks after the Army Corps green-lighted the project’s completion. The Standing Rock Sioux’s fight against the pipeline began in 2014, when Energy Transfer Partners … END_OF_DOCUMENT_TOKEN_TO_BE_REPLACED