You are here: Home / Archives for Dinokeng Game Reserve (DGR) 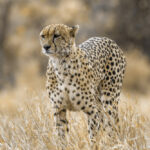 Karingani Game Reserve in southern Mozambique has successfully released four translocated cheetahs as part of a project to expand cheetah range. The world’s fastest land mammal is quickly running out of time as they are often illegally stolen from the wild as cubs and sold into the illegal pet trade in the Middle East, threatening cheetah populations … END_OF_DOCUMENT_TOKEN_TO_BE_REPLACED