You are here: Home / Archives for discovery 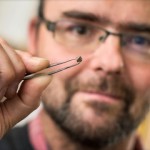 A new study by American researchers concluded that in the mantle layer that lies between the crust and the core, there are vast reserves of water, probably three times the total volume of water of all oceans on the surface of our planet. This “reservoir” of water, which seems to be stable over time, lies at a depth of up to 700 kilometers beneath the planet’s surface, in the … END_OF_DOCUMENT_TOKEN_TO_BE_REPLACED