You are here: Home / Archives for Eco Culture 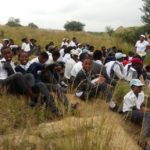 Climate change is the 21st century’s greatest threat to both humanity and biodiversity. The massive increase in the amounts of carbon dioxide and other greenhouse gases being released into the atmosphere by industrial processes, transportation and veld fires (to name a few) is increasing the global temperature which is resulting in an adverse change in weather patterns. In … END_OF_DOCUMENT_TOKEN_TO_BE_REPLACED