You are here: Home / Archives for Eerste River 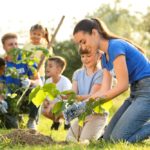 Several projects from 2014 up until 2021 have been aimed at greening the communities within the Stellenbosch Municipal boundaries and restoring the ecosystems, especially catchments and rivers in the area. The Stellenbosch Project had its roots in the Million Trees Project, initiated in April 2014 by then Stellenbosch Mayor, Conrad Sidego, as a partnership between the … END_OF_DOCUMENT_TOKEN_TO_BE_REPLACED