You are here: Home / Archives for Exxon Mobil 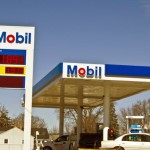 "Morally reprehensible" is what the oil giant Exxon Mobil's conduct on climate change was called during the harshest public rebuke yet by the Rockefeller Family Fund. In their letter to the public, the Rockefeller organisation criticised Exxon for their attempts to “confuse the public about climate change’s march, while simultaneously spending millions to fortify its own … END_OF_DOCUMENT_TOKEN_TO_BE_REPLACED