You are here: Home / Archives for Exxon Valdez 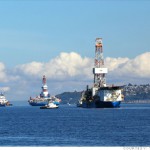 While Shell previously asserted that it would be able to recover 90% of any oil spilled as a result of its planned Arctic oil drilling, they are now claiming that it is impossible to make such claims. According to Shell spokesperson Curtis Smith: "We say in our plan we expect to 'encounter' 90 percent of any discharge on site, very close to the drilling rig. We expect to … END_OF_DOCUMENT_TOKEN_TO_BE_REPLACED