You are here: Home / Archives for Fossil Free South Africa 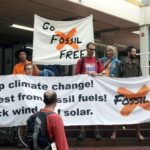 Fossil Free South Africa and 350 Africa congratulate the City of eThekwini/Durban on becoming the second South African city to commit to phasing out investments in climate-breaking fossil fuels. The eThekwini commitment was announced in late September, when the Mayors of Durban and Cape Town joined a group of 12 mayors from North America, Europe and Africa who promised “to … END_OF_DOCUMENT_TOKEN_TO_BE_REPLACED