You are here: Home / Archives for fossil fuel subsidies 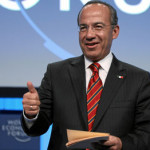 Economic growth is compatible with tackling climate change, says leader of ‘Stern Review 2′ report on climate economics. Calderon was Mexico's president for six years, during which he oversaw UN climate talks in Cancun. The choice between tackling climate change and growing the economy is a “false dilemma”, according to Felipe Calderon, former president of Mexico. Some … END_OF_DOCUMENT_TOKEN_TO_BE_REPLACED