You are here: Home / Archives for #GOGREEN 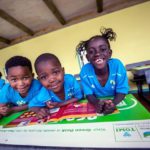 In the Cape Town suburb of Hout Bay today, 45 new desks were delivered to the learners of Ikhaya le Themba in Imizamo Yethu as part of the Old Mutual Two Oceans Marathon #GOGREEN campaign. Funded by the Two Oceans Marathon Initiative (TOMI), the unique desks were made from non-organic event waste collected during the marathon earlier this year. Thirty of the donated Green … END_OF_DOCUMENT_TOKEN_TO_BE_REPLACED