You are here: Home / Archives for heartbeat 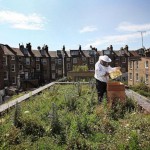 The recent dramatic bee attacks in the Western Cape have raised fresh concerns about the growing trend of urban beekeeping in South Africa. The recent incident saw more than thirty cyclists participating in a race being attacked by bees from a nearby hive – some riders had as many as 100 stings removed and others who were allergic had to be airlifted to hospital. Urban … END_OF_DOCUMENT_TOKEN_TO_BE_REPLACED