You are here: Home / Archives for horns 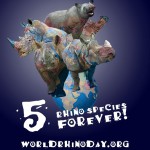 World Rhino Day in South Africa will see conservationists and concerned citizens reflecting on another tragic year, the fifth in a row, where a record number of rhinos poached will most certainly be reached. To put the current rhino poaching war into perspective, South Africa has lost a total of 2409 rhinos since 2000. However, 95% (or 2289) of these losses have been in the … END_OF_DOCUMENT_TOKEN_TO_BE_REPLACED