You are here: Home / Archives for iceberg 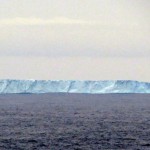 From pole to pole the ice is melting. Winter is retreating. And much of life and even the seasons themselves appear to have been thrown off-kilter. In the Southern Ocean near the Antarctic Peninsula, krill populations have dropped by more than 50 percent due to a shortening of the season in which sea ice forms. The North Pole now experiences near or above freezing … END_OF_DOCUMENT_TOKEN_TO_BE_REPLACED