You are here: Home / Archives for investigation 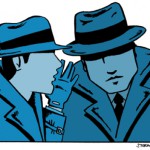 Eskom has apologised for using a private security company to spy on environmental bodies at the Medupi power station in Limpopo. In February this year, three environmental NGOs - groundWork, Earthlife Africa Jhb, and Greenpeace Africa quit Eskom's NGO forum following reports that Eskom contracted an intelligence company to spy on the them. After that, thousands of … END_OF_DOCUMENT_TOKEN_TO_BE_REPLACED