You are here: Home / Archives for Jasper Solar Energy Project 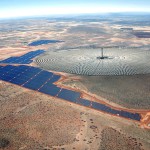 Two new concentrating solar power (CSP) plants have been announced by the Department of Energy, to be built in the Northern Cape. Kathu Solar Park and Redstone Solar Thermal Power, which will both build 100MW capacity, were the preferred bidders in the third round of the government's Renewable Energy Independent Power Producer Procurement Programme (REIPPPP), the department … END_OF_DOCUMENT_TOKEN_TO_BE_REPLACED