You are here: Home / Archives for Karpowership 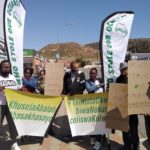 The Green Connection’s (GC) first ever Oceans Tribunal – which took place on 21-22 September 2021 – was marked by heart-wrenching stories and presentations from small-scale fishers and other communities whose livelihoods are being destroyed by extractive industries. Part of its ‘Who Stole Our Oceans’ campaign, the Tribunal – attended by more than 200 people – aims to … END_OF_DOCUMENT_TOKEN_TO_BE_REPLACED 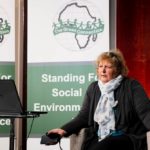 The Green Connection (GC) finds it totally unacceptable that the National Energy Regulator of South Africa (Nersa) has approved electricity generation licences for the Karpowership project, which has been mired in controversy since it was touted as a so-called emergency solution, more than a year ago. Nersa made the announcement today (21 September). According to The Green … END_OF_DOCUMENT_TOKEN_TO_BE_REPLACED 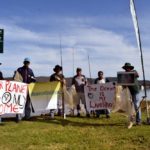 Hundreds of people from fishing communities near Langebaan and Saldanha on the Cape’s West Coast took to Friday Island Beach on World Ocean Day (8 June), to “Say No to Karpowerships”. The protesters turned up in droves to demonstrate their rejection of the government’s plans to allow the so-called Karpowerships to anchor offshore, proposed to assist the government’s power … END_OF_DOCUMENT_TOKEN_TO_BE_REPLACED 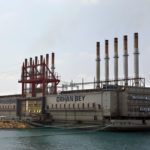 On Monday 31 May, the Green Connection lodged a formal complaint with the Department of Forestry and Fisheries and Environmental Affairs regarding the Environmental Assessment Practitioners’ (EAP) failure to comply with Environmental Impact Assessment (EIA) regulations pertaining to the EIA for the Proposed Gas to Power Powership Project at the Port of Saldanha Bay. The Green … END_OF_DOCUMENT_TOKEN_TO_BE_REPLACED