You are here: Home / Archives for Miners Shot Down 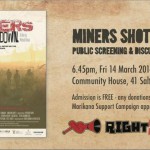 In August 2012, mineworkers in one of South Africa's biggest platinum mines began a wildcat strike for better wages. Miners Shot Down is a haunting glimpse into the days leading up to the massacre of 34 miners in Marikana in August 2012. Using the point of view of the Marikana miners, the film follows the strike from day one, showing the courageous but isolated fight waged … END_OF_DOCUMENT_TOKEN_TO_BE_REPLACED