You are here: Home / Archives for Mosul 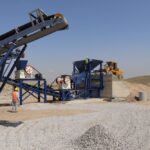 Five years since the end of the ISIL (so-called Islamic State in Iraq and the Levant) conflict in 2017, the International Organization for Migration (IOM) in Iraq and the UN Environment Programme (UNEP), with funding from the Government of Japan, has established a debris recycling centre in Mosul. After its initial use, the centre has now been handed over to Mosul … END_OF_DOCUMENT_TOKEN_TO_BE_REPLACED