You are here: Home / Archives for Naidoo 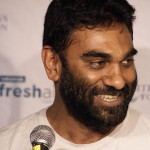 Proudly African human rights activist, Kumi Naidoo, has taken over as the Greenpeace International Executive Director. Dr Kumi Naidoo is well known for his extensive human rights activism as well as his work in civil society. Naidoo became involved in South Africa's liberation struggle at the age of 15. He played a leadership role in a national student protest against the … END_OF_DOCUMENT_TOKEN_TO_BE_REPLACED