You are here: Home / Archives for NatureServe 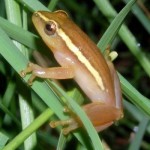 Across the globe, amphibian numbers have been in fast decline since first reported in 1990. Habitat change due to human population growth has been identified as the leading factor, but in pristine habitats population reductions are as a result of a number of factors including ultraviolet light, climate change and infectious diseases. The South African National Biodiversity … END_OF_DOCUMENT_TOKEN_TO_BE_REPLACED