You are here: Home / Archives for nuclear power stations 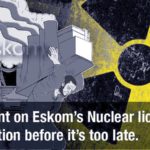 Minister Nhlanhla Nene was allegedly removed from Office because of his resistance to amongst other things, the Nuclear deal that was open for corruption and the country can not afford. Now Eskom (in a covert move) are trying to introduce a critical step of the Nuclear build program without the public noticing, by a sneaky and hidden notice in a provincial gazette... but it was … END_OF_DOCUMENT_TOKEN_TO_BE_REPLACED 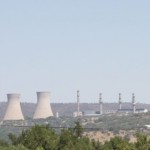 Earthlife Africa has formally handed over the records and medical files of hundreds of the workers to the Public Protector, who has promised to investigate allegations that working at the nuclear plants left many of them terminally ill and caused the death of dozens of others. Employees not adequately compensated EarthLife Africa, the Pelindaba Working Group, and the … END_OF_DOCUMENT_TOKEN_TO_BE_REPLACED 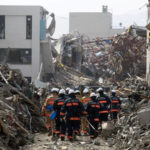 The massive explosion following a cooling problem at one Fukushima's nuclear reactors, Daiichi, has been followed by more blasts at three more nuclear reactors, and two others are in danger. Up to date reports confirm that the Japanese government has issued a statement saying that radiation levels are now at dangerous levels, given the additional radiation from a fire in a … END_OF_DOCUMENT_TOKEN_TO_BE_REPLACED