You are here: Home / Archives for Ocean Stewards 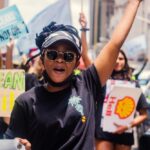 As the countdown begins to Shell’s seismic survey off the east coast of South Africa, conservationists are up in arms and are trying to beat the clock in efforts to stop Shell from following through with this operation. Shell announced their plans to commence seismic surveys along the Eastern Cape's Wild Coast, an area renowned for its high marine biodiversity, in just less … END_OF_DOCUMENT_TOKEN_TO_BE_REPLACED