You are here: Home / Archives for Papua New Guinea 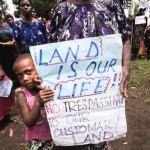 A Greenpeace report says that more than 12.35 million acres of customary-owned land in Papua New Guinea have been "given away" to foreign-owned corporations and unrepresentative landowner companies. The report, called "Up for Grabs," points to a concession introduced by Papua New Guinea's Somare government in 2003 called Special Agricultural and Business Leases, which it … END_OF_DOCUMENT_TOKEN_TO_BE_REPLACED