You are here: Home / Archives for Paul Watson 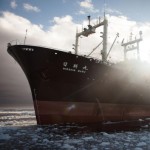 Japan's fisheries agency says it has temporarily suspended its Southern Ocean whale hunt after clashes with anti-whaling activists. On Wednesday the Sea Shepherd group claimed two of its boats were rammed by a Japanese ship in Australian Antarctic waters. Activists say the attacks happened after they were ordered to leave the area by one of the boats in the Japanese whaling … END_OF_DOCUMENT_TOKEN_TO_BE_REPLACED