You are here: Home / Archives for recycing 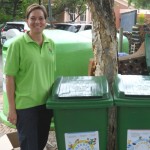 The Polystyrene Council is driving a dynamic marketing and awareness campaign of its various charity projects to schools across Gauteng. According to PSPC Director, Adri Spangenberg, twenty new schools have committed themselves during the month of March alone to collecting breadtags and other products made from high impact polystyrene, such as polystyrene take-away trays and … END_OF_DOCUMENT_TOKEN_TO_BE_REPLACED