You are here: Home / Archives for rental 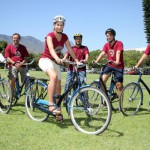 As a child growing up in Stellenbosch we had complete freedom of movement. How independent we were, as we cycled ourselves to all activities by means of our own legs – on bicycles. Student numbers were probably less than half of what they are now and only senior students were allowed cars. Even as a student I of course cycled until my final year. Later I was involved in … END_OF_DOCUMENT_TOKEN_TO_BE_REPLACED