You are here: Home / Archives for reservoir 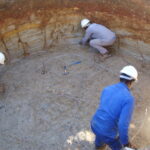 According to the United Nations, with the world’s population expected to top nine billion people by 2050, the world is going to need at least 55% more water. And not just water; clean water. In most people’s minds that would mean building more dams, such as on the Umkomazi River in KZN which at this time is largely untapped. However, worldwide there are very few new large … END_OF_DOCUMENT_TOKEN_TO_BE_REPLACED