You are here: Home / Archives for Responding To Climate Change (RTCC) 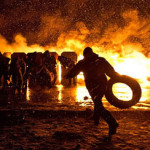 Ukraine is no longer allowed to cooperate with Russia at the UN climate talks, ending one of the firmest bonds around the negotiating table. The crisis between the two former Soviet states broke out earlier this year, when Russia annexed Crimea in response to Ukraine’s decision to pursue a closer relationship with the EU. Since then, Ukrainian negotiators have been … END_OF_DOCUMENT_TOKEN_TO_BE_REPLACED