You are here: Home / Archives for roots 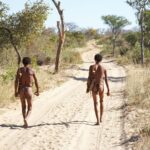 Internationally renowned Corona Studios has launched in South Africa with the premier of its first locally produced film, Between San and Insanity, in an oasis-themed outdoor cinema and desert bar set on Nelson Mandela Square (on Thursday, March 10th), complete with five tons of sand and Khoi and San art. The release of Between San and Insanity announced the arrival of … END_OF_DOCUMENT_TOKEN_TO_BE_REPLACED