You are here: Home / Archives for Ross Sea Protected Area 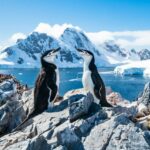 Antarctica, the white continent in the Southern Hemisphere known as one of the most pristine places on Earth absorbs nearly three-quarters of global excess heat and captures almost one-third of of the planet’s carbon dioxide. Not only does Antarctica contain 90% of the ice and 70% of the fresh water on Earth, a host of species live only here including: 5 species of penguins, … END_OF_DOCUMENT_TOKEN_TO_BE_REPLACED